Sorry for the infrequent posting on my part. Been both busy and constrained in what I could talk about writing wise while I was in talks with Ace about the next series. Hopefully now that the latter is settled I’ll be around more again. More on that below.

First though, I’d like to note that I’ve got a book launch event for SpellCrash Tuesday May 25th at the Har Mar Barnes and Noble in the Twin Cities. It starts at 7:00 pm and runs for an hour. Mostly Q&A and book signing, but there might be a bit of a reading as well if time permits.

And on to the books thing. My agent just announced it, so that makes it officially public news. The Chronicles of Aral Kingslayer sold to Anne Sowards at Ace. It’s a high fantasy/detective noir hybrid and the initial deal is for three standalone books built around the same lead character, with a possibility of more later if these do well.

Despite this being my fifth book launch, I find myself as elated and baffled and nervous and delighted and just plain punchy about the idea that something I wrote is hitting shelves all over the country today as ever. I don’t think that I shall ever get used to the idea.

It’s an enormous privilege that I get to do something I love so much as my job, and that I get to see my work on the same shelves with the writers who were such a huge part of making me who I am today. I grew up on books, reading every chance I got in my childhood. From the time I learned to read until fifteen or so I read pretty much every day. Sometimes only a little bit, but more often a couple of chapters, and in summers when I was off from school, a book or two a day. With adolescence and then the demands of adulthood that tapered off a bit, but it’s been a rare month when I haven’t knocked off at least a couple of books.

Science fiction, fantasy, and superhero comics formed the core of my younger reading, though I branched into historical and mystery, myth and legend, even the odd bit of mainstream fiction. My ideals and goals, and even the way I think were shaped by endless hours of Tolkien and Norton, McCaffrey, Dickson, Niven, Piper, Kjelgaard and Heinlein among many others. To say nothing of Stan Lee, and all the writers at Marvel and DC. As I’ve gotten older the list has only got longer and stronger: Powers and Pratchett, Bujold, McCullough (Colleen), Lackey, Weber, Cook, Hughart, Martin… I could go on and on and not reach the end, because it will continue as long as I do.

Writers weren’t my heroes when I was younger, but they created them, and I loved and honored them for giving me their worlds to play in and peopling them with my heroes and villains–gods, demons, monsters… I wanted a fire lizard of my very own, a magic ring, a blaster… Again, the list is endless. But most of all what I wanted was a doorway into other worlds, and despite the fact that I didn’t realize it right away, my writers gave me exactly that. They did it again and again and again with each new book. And it is my dearest hope and fondest ambition to provide a few of those same doors for my readers.

So, if it strikes your fancy, open SpellCrash and step through into some other place for a little while. That’s what doors are for. 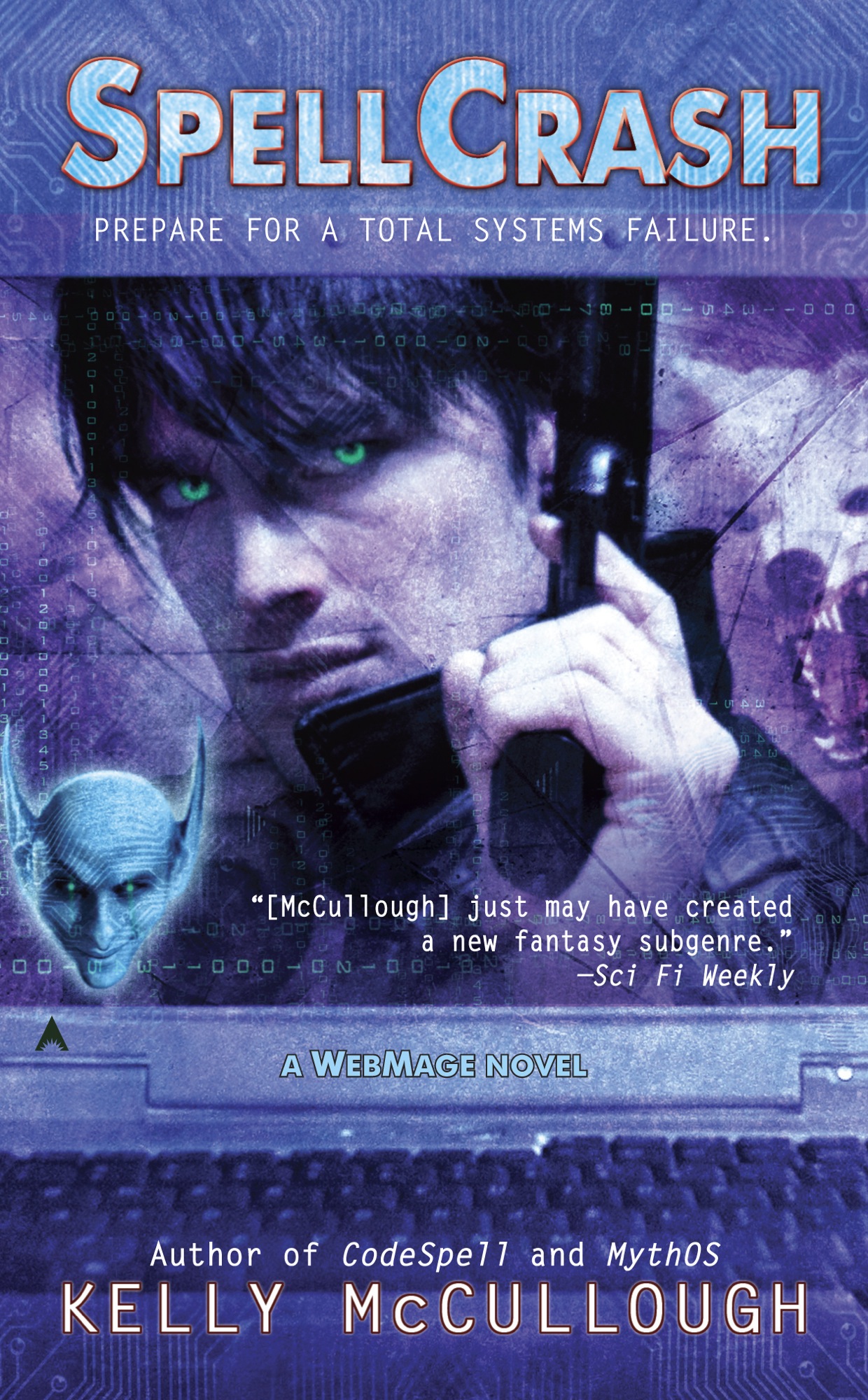 Updated to add some book and author links that should have been in there in the first place:

The first chapters of all five books are up on the online fiction page of my website for anyone who wants to see them, along with some short stories.

Reviews of the new book: Huntress (currently the top review on the page), and Skunk Cat. And, for flavor, probably the most thorough review of book I in this series, WebMage.

Oh, and a few buy link for the series. Dreamhaven and Uncle Hugos both usually have signed copies of most my stuff. Also: Indiebound, B&N, Amazon

(Originally published on the Wyrdsmiths blog May 24 and 25 2010, and original comments may be found there. Reposted and reedited as part of the reblogging project)